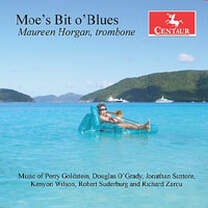 Listen to excerpts from the Centaur Records release Moe's Bit O' Blues from a performance by Maureen Horgan and Constance Cheseborough.
​
Commissioned by the New Hampshire Music Teachers Association and the Music Teachers National Association (New Hampshire Composer of the Year Commission)
​I began The Insoluble Persists thinking vaguely of Charles Ives and The Unanswered Question. A friend of mine who is addicted to the Windows computer solitaire game FreeCell told me that, of the 32,000 preprogrammed opening deals which make up the game, there is only one that cannot be won—number 11982. This bit of information led me to further thoughts on Ives and insolubility in all senses of the word, and contributed directly to the musical material in the piece. The Insoluble Persists was premiered by, and is dedicated to, husband and wife James (trombone) and Constance (piano) Chesebrough; it’s since been performed by trombonists Maureen Horgan and Haim Avitsur, among others.
​
FROM THE PRESS:
“The Insoluble Persists is worthy of repeated hearings, yet it is accessible on an initial presentation because of its bold statements and organic progression … Santore poses an impressive, stylized version of the question that remains unresolved.”
--Joel Elias, International Trombone Association Journal