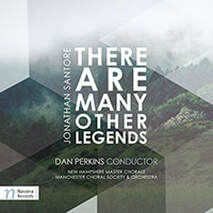 Listen to excerpts from the Navona Records release There Are Many Other Legends, track 1:
​
​Walden Recessional was commissioned and premiered by the New Hampshire Master Chorale, Dan Perkins, Music Director.

In celebration of the 150th anniversary of Henry David Thoreau’s Walden, Dan Perkins and the New Hampshire Master Chorale were planning a concert of works setting text by Thoreau. They asked me to set text from Walden that would serve as a fitting finale for the entire concert. I chose my favorite text from Walden to set for chorus and cello. The work was very well received at its premiere performances, which included one near the banks of Walden Pond itself.

"If you have built castles in the air, your work need not be lost; that is where they should be. Now put the foundations under them.

I learned this, at least, by my experiment: that if one advances confidently in the direction of his dreams, and endeavors to live the life which he has imagined, he will meet with a success unexpected in common hours. He will put some things behind, will pass an invisible boundary; new, universal, and more liberal laws will begin to establish themselves around and within him … and he will live with the license of a higher order of beings. In proportion as he simplifies his life, the laws of the universe will appear less complex, and solitude will not be solitude, nor poverty poverty, nor weakness weakness. . . . Such is the character of that morrow which mere lapse of time can never make to dawn. . . . There is more day to dawn. The sun is but a morning star."