​To the Lady Arabella 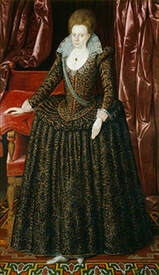 Lady Arbella Stuart by Marcus Gheerhaerts the Younger
​Lady Arbella Stuart (1575–1615) was an English noblewoman, considered for some time as a potential successor to Elizabeth I. Though remembered today primarily as a tragic figure enmeshed in the court politics of her day (she died in the Tower of London, after marrying without the permission of James I), she was widely recognized in her time as a learned “woman of the arts.” Musicians, poets, and authors dedicated numerous works to her, praising her intelligence, erudition, and “deep understanding in all the Arts.” Among Stuart’s admirers was Aemilia Lanyer (1569-1645), considered by many to be the first professional female poet in English. Her book Salve Deus Rex Judaeorum (1611) begins with several dedicatory poems to literary women of the day, among them “the Ladie Arabella.”

In 1994, another notable literary woman, Dr. Sara Jayne Steen, published a collection of The Letters of Lady Arbella Stuart, which has become a standard reference for those who wish to know more about Stuart and the times in which she lived. When I was asked to write a piece to mark Sara Jayne’s retirement from the presidency of Plymouth State University, it seemed appropriate to honor her by setting texts written by Lanyer and Henry Constable (1562–1613) to honor the woman whom Sara Jayne has done so much to bring to modern readers—a remarkable, learned “woman of the arts,” much like Sara Jayne herself.

Great learned Lady, whom I long have known,
And yet not known so much as I desired:
Rare Phoenix, whose fair feathers are your own,
With which you fly, and are so much admired:
True honor whom true Fame hath so attired,
In glittering raiment shining much more bright,
Than silver Stars in the most frosty night.

Only hope of our age, that virtues dead
By your sweet breath should be revived again;
Learning discouraged long by rude disdain
By your white hands is only cherishèd.
Thus others' worth by you is honourèd.
But who shall honour yours? Poor wits, in vain
We seek to pay the debts which you pertain
Till from yourself some wealth be borrowèd.
Lend some your tongues, that every nation may
In his own hear your virtuous praises blaze;
Lend them your wit, your judgment, memory,
Lest they themselves should not know what to say;
And that thou mayst be loved as much as praised,
My heart thou mayst lend them which I gave thee.
​
—Henry Constable (1562–1613)